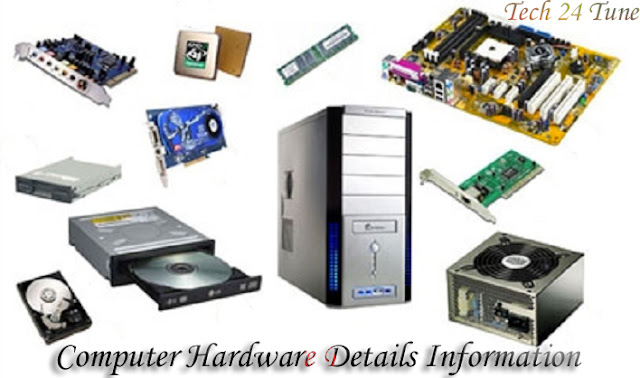 Each computer has a keyboard and a mouse that works as an input unit. Light pen, Scanner, Digitizer etc.
Used as an input.

Each computer is used as a Monitor, Display Unit. Currently LCD monitors are widely used as well as ICT monitors.

Computer Unit is the same as the box in the box. The system unit usually has the following parts:

The motherboard is the most important circuit board on a computer where many electronics components are installed and used on computer.As a cooperative of all activities, each device is connected to Mother Board in some way or the other.

Math-co-Processor enhances the computer’s processing speed while working as a co-operator of Processor. However, note that currently the processors used are in Co-Processor Built-In. In this case, different Math-co-pressor is not used.

RAM is the device that is used to store the computer’s data during processing. RAM is a type of Temporary Storage Device known as Primary Memory. Read / Write type of RAM
Memory goes on and on.

Known as a permanent Permanent storage or primary memory. BIOS’s Instructions are stored on ROM during Manufacturing which is Screen-Display with Computer On.
BIOS has a self-test program which checks Computer and connected peripreals during computer booting. Note that this is read only.

Motherboard is equipped with a 3: 5 or 3 volt battery. This battery is powered by CMOS Chip on Computer Off.

DiP switch
DIP signage is only available on XT Computer. It has 8 ON / OFF Switch
Sweet Switch is a Setup utility at XT Computer
Program does not have to do so in this case by switch OFF / ON
Computer Configuration is OK.

Every time a computer is required to communicate with no one peripheral. All input and output functions of the computer are through interrupt signals. Request Peripheral, Interrupt Controller to interrupt the CPU by sending a signal.

There are several switch and LEDs on the outside of the computer casing, which are connected with Jumper’s motherboard.